Aaron and Brittany had the perfect September wedding on the slopes of Mount Bohemia. They planned a day full of intention and infused with personality. They laughed, they cried – and they became husband and wife surrounded by family and friends in the Keweenaw Peninsula.

As soon as we heard about Brittany and Aaron’s wedding plans – a simple celebration with close family and friends at the popular ski resort – we were in eager anticipation for their big day. Their engagement session last fall confirmed what a special, fun couple they are and we were just that much more excited to see them again in 2022!

Aaron and Brittany live a life full of travel and adventure. While they live in Wisconsin, Brittany’s parents live locally and they come up regularly to visit. While they’re in the area, Mount Bohemia is one of their favorite places for backcountry skiing. For a couple who love to be outdoors, an Upper Peninsula destination wedding was a perfect way to share one of their favorite places with the ones they love the most!

Getting Ready & First Look On The Top of Mount Bohemia

Brittany got ready with her bridesmaids in the yurts at the base of the mountain, while Aaron got ready in one of the Aqua Log Cabins overlooking Lac La Belle. After dropping Rob off at the guys’ cabin, I told Brittany how Aaron bounced out to greet us. Brittany says that’s one of the things she loves most about Aaron is his enthusiasm for everything. I have to agree, and she matches his energy so well! They’re such a fun couple to be around and we couldn’t have been more pumped for their day.

Brittany and Aaron had only been dating for two months when they made a trip up north to see her parents in L’Anse. Before they left her mom slipped Aaron a small bag with a family heirloom inside – the diamond Brittany’s grandmother brought with her when she immigrated to America. After two months!! If that doesn’t speak to how perfect Aaron and Brittany are together, I don’t know what does. Aaron proposed to Brittany during their August trip hiking in Colorado. Brittany loves sets of three, so he selected a setting that incorporated this along with her heirloom stone.

Originally Aaron and Brittany planned to hold their wedding ceremony on the top of Mount Bohemia with guests arriving by ski lift to the summit. Unfortunately, the ski lift was down for summer maintenance and some unexpected delays meant the lift was still non-operational for their wedding weekend. The ceremony was relocated to the bottom of the mountain, but the staff gave us permission to take a couple of vehicles up the maintenance road for Brittany and Aaron’s first look and portraits ahead of the ceremony. Rob and I had never been to the top of Bohemia. The view took our breath away!

Brittany and Aaron’s first look was incredibly sweet. What we felt made it even more special was having their bridal party get to watch. While we don’t always recommend this due to logistics and the location – the sloping hill gave their friends a perfect vantage point. I loved seeing how excited they were for Brittany and Aaron, too!

Portraits at the Overlook

Did you know? Mount Bohemia schedules limited weddings during “slow times” for the resort. While most of the Keweenaw didn’t have color yet in early September, there was lots of great color on top of the mountain!

After we did portraits at the overlook, Aaron and Brittany requested a picture by the Haunted Valley trail sign – their favorite area to ski when they stay at Mount Bohemia.

Aaron and Brittany’s wedding took place at the base of the slopes, just a short walk from both parking and their reception. This was an ideal setup to minimize travel time. The bridal party waited in a yurt a short walk away.

Brittany’s brother officiated their ceremony. As Trent began, he started with asking Aaron and Brittany’s parents to stand, recognizing the importance of family bonds and asking for their blessing on this marriage. We loved seeing how family was emphasized throughout their wedding!

Next, Aaron’s niece read an excerpt from Winnie the Pooh by A.A. Milne.

Piglet sidled up to Pooh from behind. “Pooh?” he whispered. “Yes, Piglet?”

“Nothing,” said Piglet, taking Pooh’s hand. “I just wanted to be sure of you.”

“Even longer,” Pooh answered. “If ever there is tomorrow when we’re not together… there is something you must always remember. You are braver than you believe, stronger than you seem, and smarter than you think. But the most important thing is, even if we’re apart… I’ll always be with you.”

Brittany and Aaron wrote personal vows. Brittany thanked Aaron for being her support during the difficult times, including when she couldn’t stand to brush her teeth after tearing her ACL, and promised to always keep him fully stocked with maroon shirts. 😀

Mount Bohemia has a set of interconnected yurts that made such a fun place to have a wedding reception! Their wood-fired pizza is some of my favorite in the Keweenaw. Guests had lots of room to mingle, with one yurt set up with a pizza buffet, another yurt holding the bar, another yurt full of seating, and the center yurt wide and open for DJ with plenty of room for dancing! We loved how Brittany and Aaron tied together their wedding colors and theme, including tablecloths to match their wedding invitations.

While Mount Bohemia provided catering, all the desserts were made by Brittany’s mom Kathleen! There was an array of cheesecakes, cupcakes, cake pops, and fudge. I asked Kathleen how long it took her to create such a spread, and she said she started a week ahead of time. We had to be quick to get some pictures of the dessert table before everyone came in! There was actually even more than is shown; as the dessert plates were emptied, they were refilled with more trays from the kitchen refrigerators.

Aaron and Brittany opted to streamline their reception by going right from their entrance into their first dance together and then dances with their parents. The newlyweds’ first dance was to Weekend by Sumbuck.

“And all I think about is I don’t ever really wanna live without your love.”

Brittany and her father’s dance was to Landslide by Fleetwood Mac. They laughed and talked together and sang the lyrics as they danced.

Aaron and his mother danced to What a Wonderful World by Louis Armstrong.

After toasts, DJ Fred opened up the dancing starting with the anniversary dance. This is such a fun way to get everyone out on the dance floor right away!

Aaron and Brittany, congratulations! We have loved getting to know you both over the last year, and were SO happy to be a part of your Mount Bohemia wedding. Wishing you an amazing lifetime of love and adventures together! 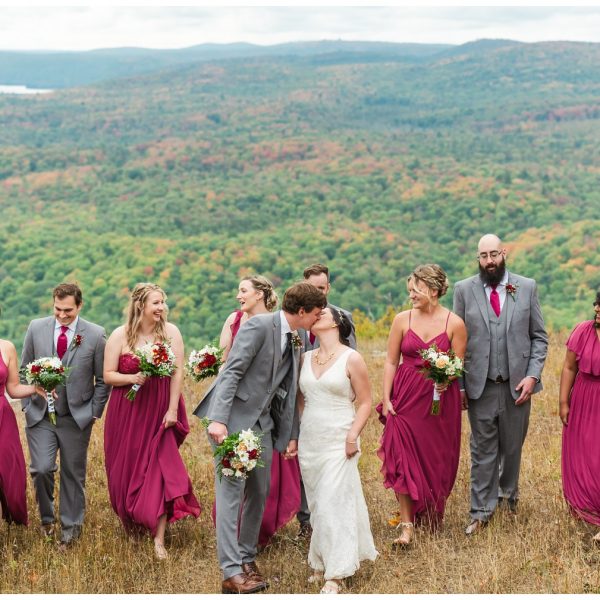 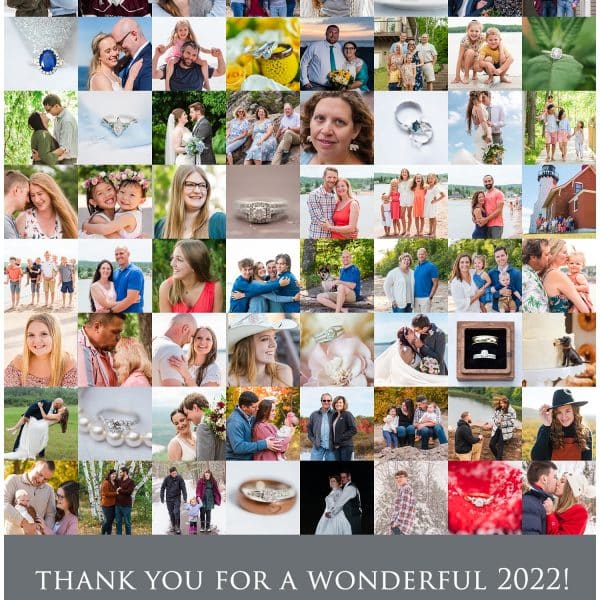 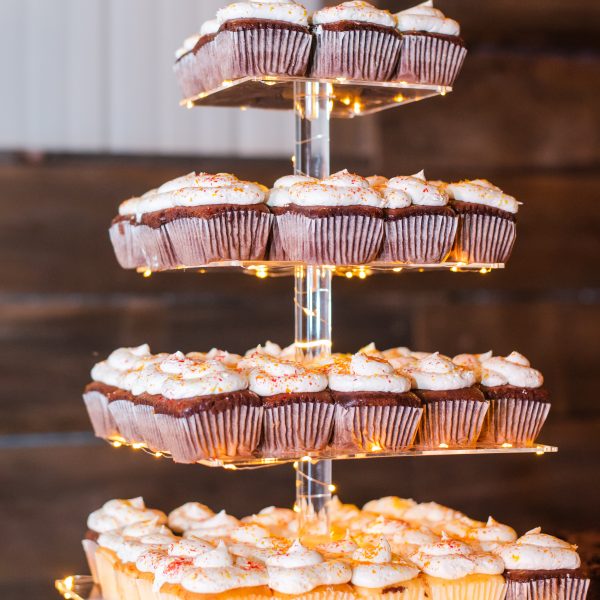 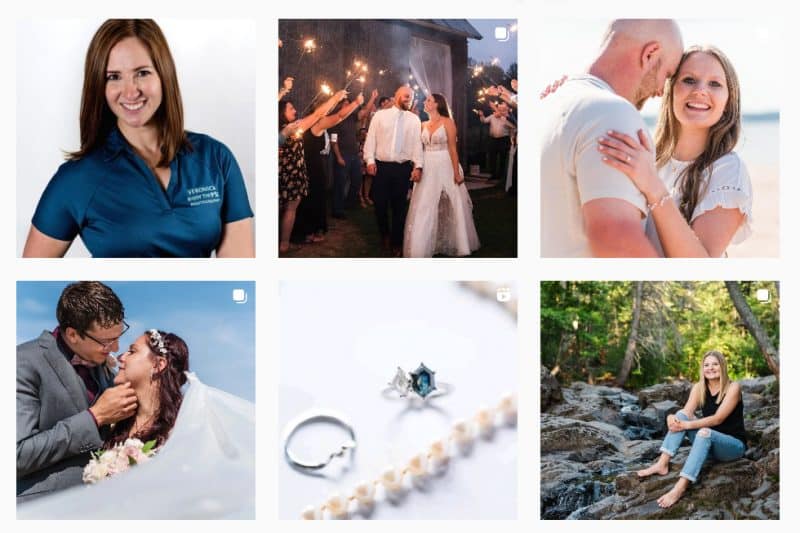